Ovitrelle / Choriogonadotropin alpha in the pharmacies: 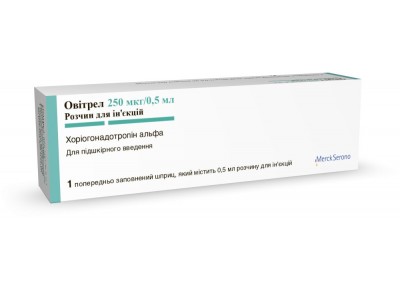 Order in the pharmacies of Ukraine

Pharmacotherapeutic group. Gonadotropins and other stimulants of ovulation.

Tumors of the hypothalamus or pituitary gland;
Hypersensitivity to the active substance or to any of the components of the drug;
an increase in the size of the ovaries or cysts, not caused by the syndrome of polycystic ovary;
gynecological bleeding of unknown etiology;
carcinoma of the ovary, uterus or mammary glands;
ectopic pregnancy in the previous 3 months;
active forms of thromboembolic disorders.

Method of administration and dose.

The drug should be used under the supervision of a physician experienced in the treatment of infertility.

The drug is for subcutaneous administration. You can only enter a transparent solution that does not contain foreign particles.

Such treatment regimens should be used.

Women in superovulation prior to the use of auxiliary reproductive technologies, such as fertilization іn vitro (IVF)

The contents of one pre-filled syringe of Ovitrelle (250 mcg) are administered 24-48 hours after the last injection of the follicle stimulating hormone (FSH) or human menopausal gonadotrophin (HMG), that is, when optimal follicular growth stimulation is achieved.

Women with anovulation or oligovulation

The contents of one pre-filled syringe of Ovitrelle (250 mcg) are administered after 24-48 hours after achieving optimal follicular growth stimulation. The patient is encouraged to have a sexual intercourse on the day of the introduction of Ovitrelle and the next day.